Today versus "back in the day": Kids' health getting worse? 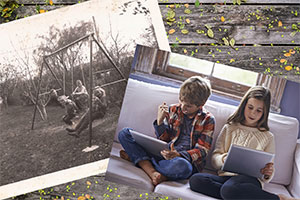 Today versus "back in the day": Kids' health getting worse?

Advances in medicine and public health have greatly reduced illness and death for children over the last century. Yet, conditions such as childhood obesity and asthma are now more common, as are behavioral problems. That raises a key question: are kids perceived as healthier today than in the past?

In collaboration with the Children’s Hospital Association, in January 2016 we polled almost 2700 adults about their perceptions of physical and mental/emotional health of children younger than 18 years old today, compared to when the adults themselves were growing up. They were also asked about particular aspects of growing up in the US today compared with children in prior generations.

Among adults nationwide, the dominant perception is that children’s health is worse today than it was when the respondents themselves were growing up.
Regarding mental/emotional health of children:

Regarding physical health of children:

Possible explanations for kids’ worse mental/emotional health today are evident in Figure 1. Compared to when the respondents themselves were growing up, adults today perceive that kids have less quality family time, lower quality of personal friendships, and less coping and staying positive. Kids today are also perceived as having more stress than in the past.

There were generational differences in adults’ perceptions of children’s health today versus when the respondents themselves were growing up. Pre-Baby Boomers (age 70 and older) were the group most likely to perceive that children’s physical health today is better than when they were kids themselves (41%), while 33% of Baby Boomers (51-69 years old), 24% of Generation Xers (35-50 years old) and 24% of Millennials (18-34 years old) were less likely to perceive that children’s physical health is better. In contrast, kids’ mental/emotional health was perceived as better today than in the past by more similar proportions of respondents: Pre-Baby Boomers (21%), Baby Boomers (17%), Gen Xers (13%), and Millennials (16%). 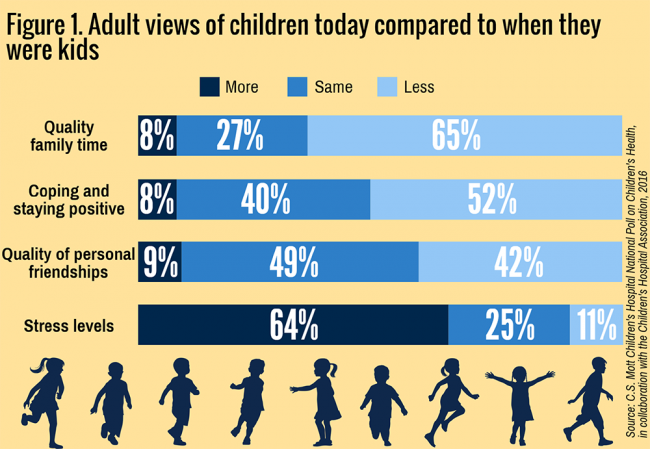 While the health of children in the US today is better in many ways than it was in generations past, it is clear from this latest Poll that many adults in the US perceive the health of children as worse today than when they were growing up, themselves. This view is especially strong regarding mental/emotional health, where over one-half of adults view children’s health today as worse than during their own childhood.

Almost two-thirds of adults in this Poll believe that kids currently have more stress and less quality family time than in the past. These findings linked to behavioral health are consistent with what we have found in prior Polls related to bullying, stress, suicide, and depression as leading child health concerns identified by adults across the US.

Adults’ perceptions of children’s health needs appear to vary somewhat by generation, too. Among older generations such as Baby Boomers and Pre-Baby Boomers, at least 1 in 3 adults perceive that children’s physical health is better than when they were growing up, while smaller proportions of younger adults hold similar views. Perceptions of mental/emotional health were more consistent across generations, suggesting broad views of today’s youth being affected by a generational decline in children’s mental well-being.

It is also striking that more adults view mental/emotional health for children as worse than during their own childhoods than when asked to compare physical health in the same way. This marked difference may relate to the fact that medical and public health innovations have generally focused more on physical health ailments and less on behavioral concerns. These latest results suggest that adults in the US today would support a stronger focus in research and programs on children’s mental/emotional health, where most respondents perceive a clear need.

The survey was administered in January 2016 to randomly selected, stratified groups of adults age 18 and older (n=2,648), using mixed modes (web-based and telephone) to encourage participation by potential respondents with different mode preferences. Adults were selected from GfK’s web-enabled KnowledgePanel® and from NORC’s AmeriSpeak® panel that both closely resemble the U.S. population. These sub-samples were subsequently weighted to reflect population figures from the Census Bureau and were then combined to serve as a unified analytic sample. The survey average completion rate was 53% among panel members contacted to participate. The margin of error is ± 1 to 5 percentage points. 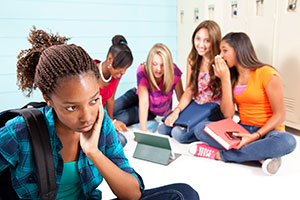