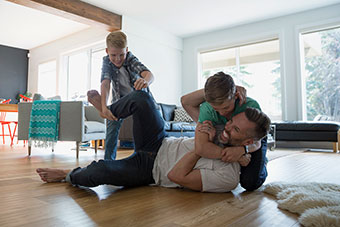 About half of fathers (52%) say they have been criticized about their parenting style or choices. The most common source of criticism is the child’s other parent (44%), followed by their child’s grandparents (24%) and the father’s own friends (9%). Fathers also report receiving criticism about their parenting from strangers in public places or online (10%), and from professionals who interact with their child, such as teachers or health care providers (5%).

Many fathers respond to criticism of their parenting style in a positive way, such as making a change to some aspect of their parenting (49%) or seeking out information or advice on the topic of criticism (40%). In other cases, fathers experience negative feelings towards criticism, including feeling less confident as a parent (28%) and wanting to be less involved as a parent (19%). Many fathers (43%) feel the criticism directed their way is often or always unfair. 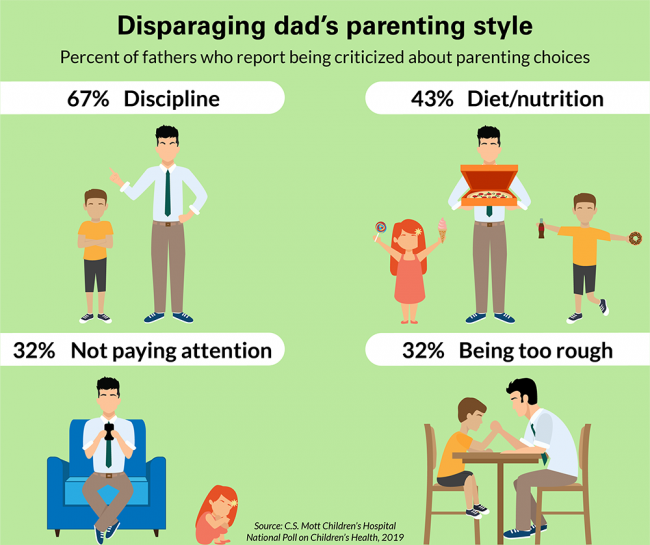 Fathers who are loving and engaged can have a positive impact on their children’s development and well-being. Cultural norms, family dynamics and prior experience with his own father can shape a dad’s parenting style, and can influence the expectations of others.

This Mott Poll asked a national sample of fathers of children 0-13 years about their experiences being criticized for their parenting style or choices. For the 52% of fathers who said they had experienced such criticism, the most common source of the finger-pointing was the child’s other parent. In some instances, this may be a reflection of historical gender roles, where mothers are viewed as more natural caregivers, and fathers as having limited parenting capabilities that need supervision or correction. When this occurs, minor differences in parenting style can cause conflict over the “best” way to parent.

Discipline was the most common topic of disparagement, reported by two-thirds of fathers who have been criticized. Addressing a child’s misbehavior is one of the greatest challenges of parenting. Yet it can also be challenging for parents to agree on a consistent framework for discipline. For example, parents may disagree about the age at which a child should be expected to follow rules, or have different ideas about the appropriate consequences for misbehavior. Inconsistency between parents in responding to a child’s behavior can send mixed messages to the child, and result in conflict and criticism between parents.

Two topics of criticism – being too rough and not paying attention – likely result from common differences between mothers and fathers in parenting style. In general, fathers engage in more physical play with their children; criticism can ensue if mothers or other adults perceive that the father is not adequately protecting the child from injury. Similarly, criticism about not paying enough attention to the child likely stems from other adults assuming that the child requires closer supervision than the father is providing.

About half of fathers in this Mott Poll responded to criticism by making a change in their parenting choices. This may be the best outcome when fathers have limited experience and truly are unaware of good parenting practices. Forty percent of fathers said that criticism prompted them to seek out information or advice on the topic; in some cases, new information might prompt a change in parenting behavior, but in others, the father may find confirmation of his approach. Mothers, co-parents, and other family members should be willing to acknowledge that different parenting styles are not necessarily incorrect or harmful.

Over one quarter of fathers in this Mott Poll noted that criticism made them feel less confident in their parenting, and 1 in 5 fathers said that criticism made them want to be less involved as a parent. In short, too much disparagement can cause fathers to be demoralized about their parental role. This is unfortunate for both father and child, and those tempted to criticize fathers should be wary of this potential consequence.

Finally, some fathers have felt that the professionals who interact with their child are dismissive of their parental role. For example, 1 in 20 fathers said they have been criticized by a teacher or health care provider, while twice that many felt the teacher or health care provider assumed they were not knowledgeable about their child. And one quarter of fathers have felt excluded from communication about their child’s activities. This subtle form of disparagement can undercut fathers’ confidence or signal that they are less important to their child’s well-being. Professionals who work with children should take care to avoid negative assumptions about fathers’ level of involvement or interest in parenting.

This report presents findings from a nationally representative household survey conducted exclusively by Ipsos Public Affairs, LLC (Ipsos), for C.S. Mott Children’s Hospital. The survey was administered in February 2019 to a randomly selected, stratified group of parents age 18 and older (n=2,032). Adults were selected from Ipsos’s web-enabled KnowledgePanel® that closely resembles the U.S. population. The sample was subsequently weighted to reflect population figures from the Census Bureau. The survey completion rate was 60% among panel members contacted to participate. This report is based on responses from 713 fathers who had at least one child 0-13 years. The margin of error is ±2 to 6 percentage points. 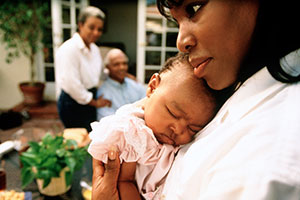 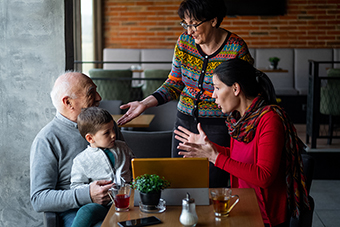