Mothers of young children face numerous parenting decisions, starting with choices about infant feeding methods and sleep position, to daily decisions about toddler diet, discipline and health/safety. Some mothers have a support system that offers encouragement during the challenges of parenting a young child; other mothers face negativity and second-guessing of their parenting choices. The C.S. Mott Children’s Hospital National Poll on Children’s Health asked a national sample of mothers of children 0-5 years old about their perceptions of being criticized about their parenting.

Most mothers (61%) say they have been criticized about their parenting choices, most frequently by family – their spouse/child’s other parent (36%), their in-laws (31%), or their own mother or father (37%). Mothers report less criticism from peers – friends (14%), other mothers they encounter in public (12%), commenters on social media (7%) – or from their child’s health care provider (8%) or childcare provider (6%). About 1 in 4 mothers (23%) have been criticized by three or more groups. Overall, 62% believe that mothers get a lot of unhelpful advice from other people, while 56% believe that mothers get too much blame and not enough credit for their children’s behavior. These beliefs are more common among mothers reporting criticism from multiple groups. 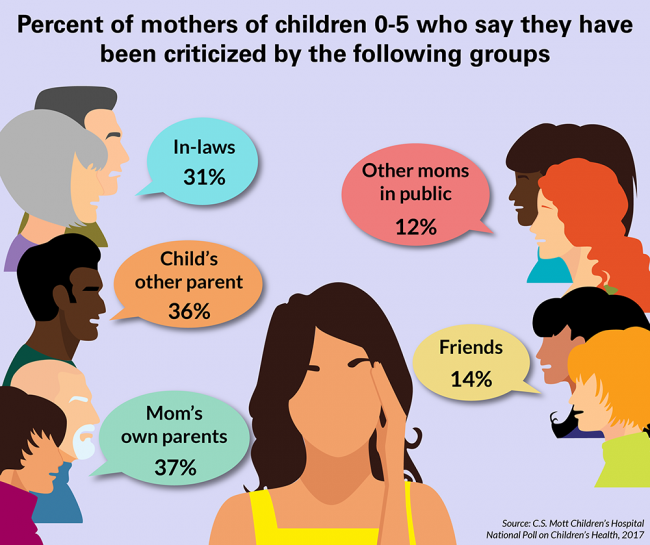 Among mothers of children 0-5:

Parenting a young child can be a challenging experience. From infancy through preschool, children experience rapid growth and changing needs. New information about child health and safety seems to be constantly emerging, challenging long-held parenting practices. Cultural norms around parenting can differ, leading to conflicting views over the “best” or “correct” way to parent. Often, mothers of young children seek advice about parenting choices from family, trusted friends, or professionals; in other situations, unsolicited advice is offered about an “incorrect” parenting practice.

This Mott Poll asked a national sample of mothers of children 0-5 years about their perceptions around criticism. Six in ten mothers said they have been criticized about their parenting choices, most commonly from family members. This may reflect the high volume of interactions with family members, or that mothers may interpret family criticism as an attack by those who should be more supportive. In contrast, mothers reported less criticism from professionals interacting with their child (such as health care or childcare providers); it is plausible that statements from professionals are perceived as expert advice, not criticism.

The targets of criticism reported in the Mott Poll reflect differences in cultural norms of parenting. Discipline, the most commonly criticized parenting topic, is rife with opposing views, such as spanking vs time-outs, or strict adherence to rules vs allowing space for the child to explore. Further conflict can arise when those criticizing have unrealistic expectations for a toddler or preschooler, while the mother feels she has a better understanding of her own child’s abilities. Family visits can create unique challenges, as the child’s usual routine is disrupted to accommodate travel and special events; mothers who believe their child’s behavior is impacted by the family visit may be particularly irritated by family criticism of her discipline choices.

Mothers also report being criticized about breast- vs bottle-feeding and sleep. These are just two topics where national guidelines have shifted in recent years, such that parenting norms of older family members may not reflect the current best practices.

Many mothers in this Mott Poll responded to criticism by researching the topic and consulting with a healthcare provider. In some cases, new information prompted mothers to make a change in their parenting practices to better align with expert recommendations. In other situations, the research might validate a mother’s parenting choice or provide ammunition with which to refute criticism. Family members should be willing to acknowledge that mothers of young children may have more up-to-date information about child health and safety, and “what we used to do” may not be the best advice for today.

This Mott Poll also confirms what has long been observed in many families: mothers avoid people who are too critical. Decisions about where to spend holidays or who babysits the child may hinge upon the mother’s perception of whether a family member or friend is supportive vs overly critical. Those who wish to spend time with a young child may want to present their advice in a positive tone, or risk having that time abbreviated.

Of concern are the 42% of criticized mothers who say that criticism has made them feel unsure about their parenting choices. Sorting through the deluge of information mothers receive about parenting practices, products, and priorities can become overwhelming. Maternal anxiety, if prolonged or pronounced, is a problem for both mother and child, and for mothers struggling with anxiety, one seemingly innocent comment can become a tipping point into potentially harmful uncertainty. This is an area where child health providers can intervene, by encouraging mothers to ask questions about any parenting uncertainties, and offering reassurance and practical advice.

This report presents findings from a nationally representative household survey conducted exclusively by GfK Custom Research, LLC (GfK), for C.S. Mott Children’s Hospital. The survey was administered in January 2017 to a randomly selected, stratified group of parents age 18 and older (n=2,001). Adults were selected from GfK’s web-enabled KnowledgePanel® that closely resembles the U.S. population. The sample was subsequently weighted to reflect population figures from the Census Bureau. The survey completion rate was 61% among panel members contacted to participate. This report is based on responses from 475 mothers who had at least one child age 0-5 years. The margin of error is ±2 to 6 percentage points.