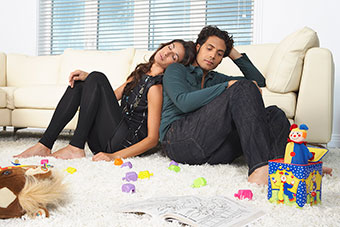 Alcoholic beverages are frequently a part of special events and celebrations, such as weddings and holiday gatherings. For parents, celebrating with alcohol comes with the responsibility of making plans for the care of their children. The C.S. Mott Children’s Hospital National Poll on Children’s Health asked a national sample of parents of children 0-9 years about their experiences with alcohol and special occasions.

Eight percent of parents reported a prior situation where they may have been too impaired from alcohol to fulfill their parenting responsibilities; among those parents, 54% said the experience caused them to limit alcohol consumption in the future, and 46% said it made them plan ahead for child care.

One in 3 parents (29%) said they know of another adult who might have caused an unsafe situation for their child due to drinking alcohol on a special occasion. Most often, these parents noted the concern that the other adult was too impaired or hung over to supervise their child (61%) or to handle a possible emergency (48%); and less commonly that the adult drove with a child while impaired (37%), got violent or out of control in front of the child (28%), or injured the child (7%). 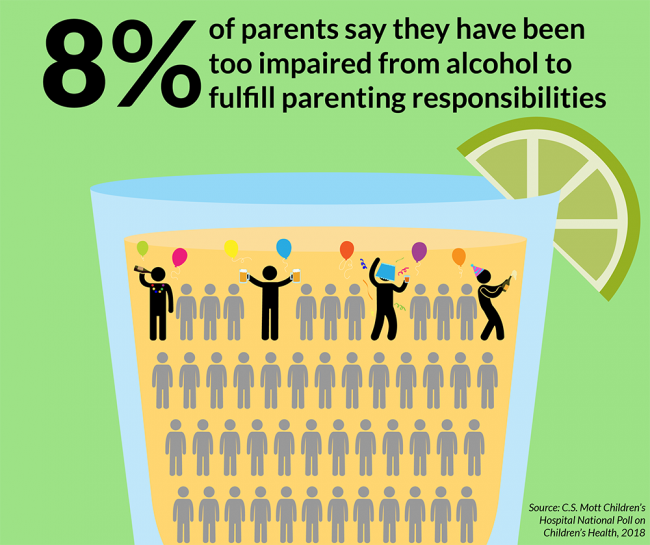 Special events like weddings, reunions, and holiday parties offer adults an opportunity to socialize with other adults. Alcohol is often a part of these events. But when those adults are parents to young children, advance planning is necessary to ensure that children have appropriate care and supervision during and after the celebration.

Most parents are good about taking their children under consideration when planning for the evening of a special event, which includes arranging for childcare and transportation. Somewhat fewer parents plan for the day following the event, when their parenting ability could be impaired by the after-effects of imbibing. Day-after planning includes thinking about how much alcohol is likely to be consumed, and whether that amount will lead to a hangover the next day.

An important finding from this Mott Poll is that 1 in 12 parents of children 0-9 years admitted to at least one prior situation where they may have been too impaired from alcohol to fulfill their parenting responsibilities. Many of these parents indicated they learned a lesson from that experience, reporting that they changed their habits with regard to the amount of alcohol they consumed and that they were more careful about making plans for the care of their children during and after social events that included alcohol. About the same proportion of mothers and fathers acknowledged a prior lapse in judgment related to alcohol, reinforcing the fact that the risks of parental alcohol use should not be viewed as relevant to only moms or dads.

A considerable number of parents responding to this Mott Poll (3 in 10 parents) said they know of another parent who had created an unsafe situation for their child due to alcohol. Parents reported knowing about serious situations, including impaired parents driving with their child in the car, as well as parents getting violent or even injuring their child. Though rare, occurrences of this severity should prompt adults to step in and ensure the child’s immediate safety, such as keeping the child in another adult’s care until the drunk parent can sober up, and to urge the offending parent to make better choices in the future regarding alcohol use.

More commonly, Mott Poll respondents described situations in which another parent was too impaired or hung over to adequately supervise their child or handle a possible emergency. A parent who is technically at home “watching their child” but passed out on the couch is unlikely to recognize the everyday risks of childhood, such as choking, falling, or getting into dangerous household products. This may be a situation where family, friends or neighbors may step in to help, by inviting the child over to play, keeping an eye on children playing outside, or stopping by to make sure everyone is safe.

During the holiday season, parents should plan ahead to determine their approach to celebrations that feature alcohol. This should include strategies to avoid over-indulging, such as alternating alcoholic and non-alcoholic beverages. Transportation plans should ensure that the parent arrives home safely, and that the babysitter is not relying on an impaired parent for a ride home. If alcohol use might cause the parent to feel suboptimal the following day, childcare arrangements might involve the child staying overnight at a friend or relative’s home.

This report presents findings from a nationally representative household survey conducted exclusively by GfK Custom Research, LLC (GfK), for C.S. Mott Children’s Hospital. The survey was administered in October 2018 to a randomly selected, stratified group of parents age 18 and older (n=2,007). Adults were selected from GfK’s web-enabled KnowledgePanel® that closely resembles the U.S. population. The sample was subsequently weighted to reflect population figures from the Census Bureau. The survey completion rate was 60% among panel members contacted to participate. This report is based on responses from 1,170 parents who had at least one child 0-9 years. The margin of error is ±2 to 6 percentage points and higher among subgroups.